Every morning usually begins with the donning of cloth in the form of clothing.  Cloth envelops us from morning to night; we slumber between it, we use it to make our homes more comfortable and appealing, and according to statistics, a large percentage of people worldwide, work with it in the textile industry.

Cloth has been celebrated in early paintings – a painter who could paint textiles well was in high demand for portraiture and could demand extravagant prices as a result.  It was used to fantasize the ebb and flow of fashion trends throughout much of recorded history, as well as being used as a proverbial political and social football in numerous Sumptuary Laws throughout many countries around the world.  It displayed and promoted wealth, status, religion, affiliations and power.

In reality, cloth is a basic need – one which few of us probably even consider on a day-to-day basis as we button up our ready-made shirts and climb into our bespoke suits.  But our ancestors did.  They revered and respected cloth and the trimmings and embellishments used to adorn it because they knew their value and worked hard to produce them. 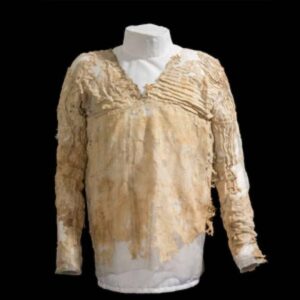 Looking for the wellspring of cloth is well-nigh impossible.  Archeological methodology has undergone great changes in the last century, becoming more of an investigative science than merely a means to fill museums with unusual curiosities. Thankfully, all that has since changed and there’s now a duty to record for humanity all that is found, along with its context, no matter how slight.  One has to wonder though, just how many scraps of cloth, previously deemed useless and of little value, have been thrown away, forever imposing their purpose and value to dust?

One such survivor is a touchingly poignant glimpse of an ancient linen garment (pictured left).  This exceptional find of an almost complete, highly perishable textile is remarkable.  Excavated in 1913 by Egyptologist Flinders Petrie, from a First Dynasty tomb at Tarkhan, 50km south of Cairo, it lay amidst other textiles until 1977, when conservation work was undertaken at the Victoria and Albert Museum in London.

Made of three robust pieces of hand-woven linen with a natural pale grey stripe, it incorporates knife-pleats in the sleeves and bodice.  The hem no longer exists, so its true length is undetermined, but indications suggest that it would have fitted a slender women or young teenager.  Evidence of its wear is visible – this was a garment made to be worn.  It had a purpose.  The use of knife-pleats also shows an understanding of shaping garments to fit the body, not an easy undertaking.  Re-interpreted almost as is, it’s a garment that could easily be worn today.

Although spinning and weaving were initially the domain of women, few women had the time to write and record what they did.  And cloth is not a survivor, so we must rely on archeology, art, manuscripts, pottery and ancient texts written by men to help piece together the mismatched maze that ancient cloth and the tools used to manufacture it, is. 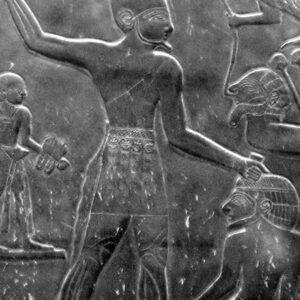 And ancient artists have not let us down.  Referencing the goddess Athena is a Greek loom weight inscribed with an owl spinning wool dating from the 4th century BC.  A 5th century BC Greek vase found in Italy shows a young woman at her loom, accosted by suitors offering her jewellery from a decorated box.  Thutnofer, an Egyptian nobleman, had his Theban townhouse drawn in his tomb in the late 15th century BC, depicting three levels of domesticity.  Male servants are shown weaving cloth and spinning rope in the basement.

Ancient writing is another source of information on cloth making.  A clay tablet from Pylos, Greece, tells of the rations sent to textile workers and their children.  A cuneiform letter dating from c. 1900 BC from an Assyrian businesswoman to her merchant husband plying the caravan trade routes, telling him of a debt still owed for cloth she’s sold, and asking him when he sends her a purse to include some wool as wool in the city is costly.  Words of daily business life, still speaking to us.

Mosaics and even furniture were used to depict what would have been common scenes in ancient times.  Fragments of mosaic show two women from Mar, working with a spindle, and an early second millennium BC, and an Egyptian linen chest c. 1450-1400 BC was painted to represent the lord and lady enjoying refreshments in a shady pavilion formed using bright mats and textiles for the roof,  from an 18th Dynasty tomb of Kha at Thebes.

Investigating the rich story that comprises ancient cloth is fascinating.  Archeology and art offer us the unquestionable roadmaps we need to decipher things like ancient spinning and weaving techniques and the tools used to create cloth, innovations in those tools, women in business, women’s role in the home and the value these people place on producing cloth on a day-to-day basis.

In ancient times, from slaves to Queens – people made cloth.