When I first had the idea to do a Podcast featuring stitch and embroidery, I agonised where I should start.  I mean, there’s just so much latitude, so many topics, so many people writing informative, knowledgeable books or stitching beautiful things.  But in the end, I went with my gut feeling – and that kept saying to me (someone who thought she knew a little about this subject) – start at the very beginning.  So that’s what I’m doing here.  Simple.  Well no actually.  This is where my whole world has changed – for the better, I might add, as I’ve had to learn to research and write.  I’m now a devotee of structured, methodical research, endless drafts and redrafts – and you can bet I’m learning fast.

‘A journey of a thousand miles, must begin with a single step.’  Lao Tzu

So, just what is the beginning exactly?  Well, for me, it meant going back to when a needle and fibre were first used, and there’s no way to pinpoint exactly who, where or why – it’s all supposition really as nothing remains, but it makes sense that to survive, prehistoric man had to keep himself and his family warm, fed and sheltered, and to do that keeping warm surely must have been the primary motivator for using plant or animal fibres to make a yarn or thread, twisting them together to make an even stronger fibre – perhaps even weaving some sort of basket or tie to wrap and carry possessions for transportation as they followed herds of animals.  And on those long, dark nights, using firelight while sheltering in a cold, damp cave, it makes sense that he played around with a bone shard, perhaps using it as an awl at first to create holes for lashing those warming hides together, but then taking that one step further, to create a small hole at one end of that bone shard and threading the plant fibre he’d made through the eye to enable stitch-making. 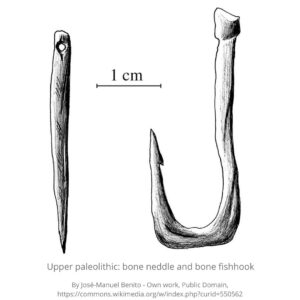 And that ability to make a stitch using some form of needle and fibre would have enabled them to fabricate those hides into a more body-hugging covering that would’ve stayed put when he moved.  Now, think about it and analyse those steps from making a fibre yarn to developing an eyed needle to stitch or lash those hides together.  It’s a sophisticated and logical set of thought processes.  I never underestimate prehistoric man because, thousands of years later, here we are, still using a needle and thread.

‘It is not the strongest species that survive, nor the most intelligent, but the most responsive to change.’  Charles Darwin

Survival was the name of the game here, and the development of the needle and twisted fibres was a game-changer.  Their lives would have been so much better as a result.  They would have been warmer, they could now make some form of net or trap to snare animals, they could use the twisted fibres to make more highly-developed tools and to help lash things together for easier movement from camp to camp.

The development of the needle, while important then, was to become a game-changer, worldwide.  With greater human interaction, needles obviously became utilised more and more.  Clothing and textiles became ever more complex, becoming a non-verbal communication force, indeed a silent language, indicating hierarchy, social identity, as well as tribal affiliations, and according to Anthropologist, Francesco d’Errico, ‘many of the needles we discovered were not simply used to manufacture clothes but for embroidery and ornaments.  There was an aesthetic role.’  So early man recognised the power and beauty of a repetitious decorative stitch.

These observations on clothing across a broad spectrum of time and culture show a similarity of thinking: ‘The apparel oft proclaims the man,’ Shakespeare, ‘Clothes Make the Man,’ Mark Twain, ‘Abroad we judge the dress: at home, we judge the man,’ Chinese proverb, ‘Even a packhorse driver would look great in fine clothes,’ Japanese saying, and finally a beautiful Korean saying, ‘Clothes are wings.’

‘There’s a way to do it better, find it.’  Thomas Edison

So, for me at least, the development of that first needle, the innovation of adding an eye to one end to carry a thread, along with the ability to make a fibrous yarn, probably from plants near to where they were staying or hunting or from animal sinew, was the beginning.  Hats off to anyone who sees a problem then seeks a solution, because, at the end of the day, we’re no different from our prehistoric ancestors – we just have a lot more technology and innovation informing us over thousands of years.

All I can say is thank goodness for a needle and thread.